Have you ever been to a place that is amazing, special and somehow still secluded from the world? Have you ever stumbled upon a piece of serenity, hoping it will never be discovered by anybody else so you can have it all by yourself?

Faroe Islands is exactly such a place… or at least it was until National Geographic Traveler awarded it the Number 1 Island Destination in 2015.

We are not complaining though, because that award is probably what caused us to stumble upon this hidden gem as well.

What Is The Faroe Islands?

When you tell someone you have been to the Faroe Islands, most people look at you with a blank expression followed by a “hugh?”… “what Islands?”… or a “where’s that!?”

The Faroe Islands is made up of 18 volcanic islands situated in the North Atlantic Ocean between the UK and Iceland. The cluster of islands are connected by bridges, underground and sub-sea road tunnels, ferries and even by helicopter rides.

This must be Europe’s best kept secret. Honestly, we wish it could stay that way, but at the same time this place is so incredible you can’t help but to want to share it with others. 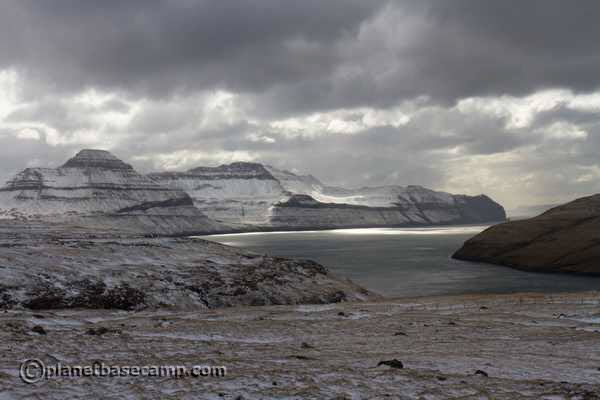 Getting to the Faroe Islands is not the easiest thing. Undoubtedly, the most adventurous way to visit this gem is by ferry. However, for this option you need to have extra time and money at your disposal. 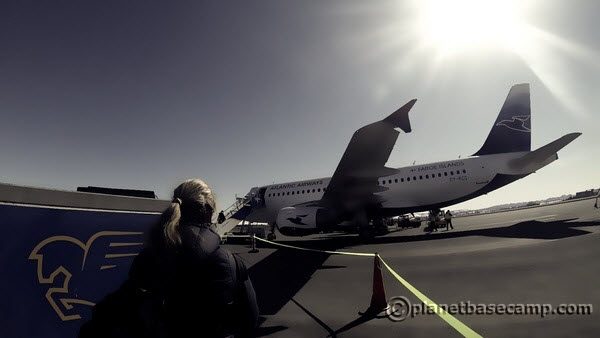 At first our flight was delayed due to strong winds in the Faroe Islands. We worried that we would not be able to have a good view of the islands from the plane. However, it turned out this was the last thing we needed to worry about. Although we had a beautiful view as we approached the runway, the strong wind caused us to hold our breaths as we came in to land. 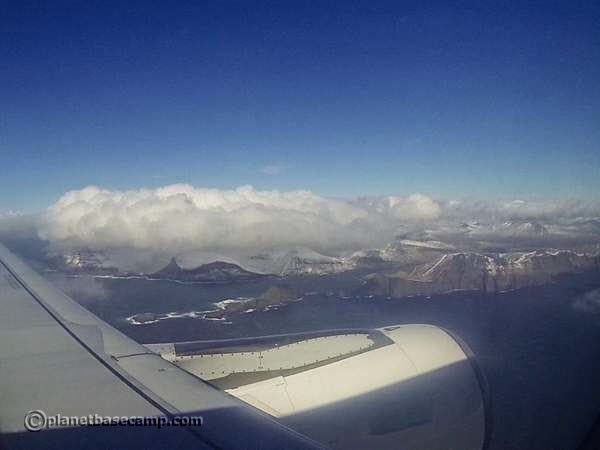 While we landed in extreme weather, the pilot handled the strong crosswind exceptionally well. As we landed all the passengers on the plane sighed with relief and then applauded the pilot, and it wasn’t long before we exited the plane.

From the moment we entered the airport we knew we loved the place. Getting our bags was quick and easy. The bathrooms received a 10 out of 10 for cleanliness. Everything in the building worked like a well-oiled machine.

After we collected our bags, we went straight for the car hire desks. When we tried to pay for our vehicle, we had problems with our credit card. For some reason the card became blocked, and we didn’t have any backup credit card to pay for the car. It was also too late in the afternoon to phone the bank at home.

Fortunately we were able to draw enough cash from the ATM with a second bank card.

In the end we were the last people left in the airport. All the other shops had closed and the terminal cleared within about an hour of our landing.

Our assistant remained calm and friendly, and under the circumstances we couldn’t have hoped for a better experience. We even ended up with an upgraded model without having to pay any extras, and this really made us feel welcome.

We were mesmerized within the first hour of exploring the Faroe Islands. We knew this place was like no other, and that we would never be the same after experiencing this amazing destination.

Here are some (but definitely not all) of our most memorable moments visiting the Faroe Islands.

From the airport we headed straight to our first attraction. Gásadalur is a tiny village on the North-Western side of the island of Vágar. This village is well known for its waterfall (Múlafossur Waterfall) that runs straight into the ocean.

From this village you have a beautiful view of Mykines, which is the westernmost island of the Faroe Islands. 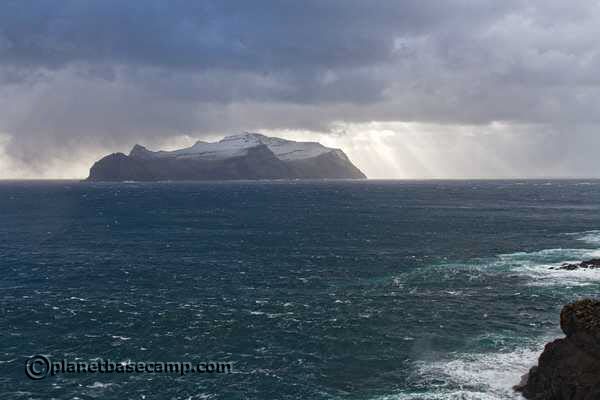 It was getting late in the day, and we had to get to Vestmanna before it was dark. As you drive from the airport towards the neighboring island, you are greeted with this magnificent view of Koltur Island on your right. 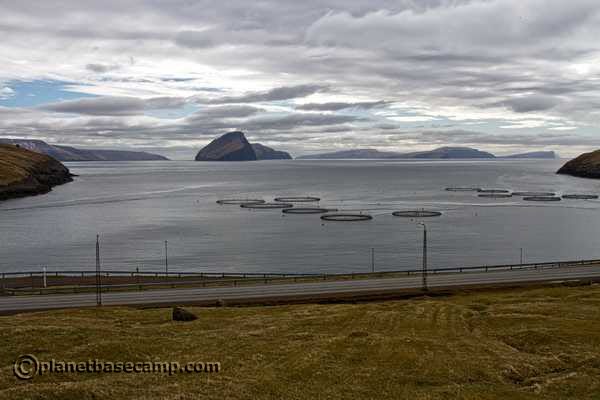 Vestmanna is a town on the island of Streymoy. Vágar and Streymoy are connected via a world-class sub-sea tunnel. 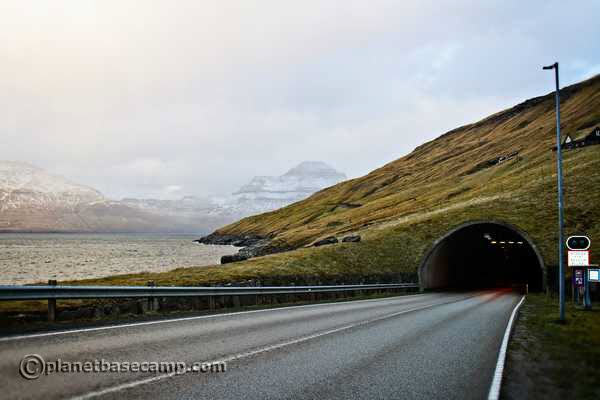 When we arrived in Vestmanna, it was way past our check-in time. Being captivated by the beauty of nature combined with prolonged day light can sometimes cause you to be late for other appointments! However, the owner of the house where we stayed was friendly and didn’t mind helping us, even at the unruly hour that we rang him up.

We had the whole house for ourselves, with a beautiful view over the town’s harbor. 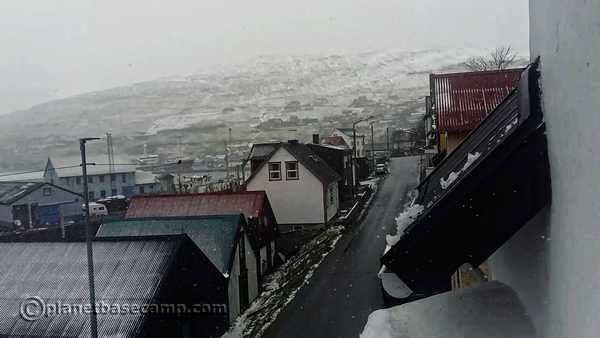 After a long and eventful day, we slept solid until late the next morning.

The capital “city” of the Faroe Islands is situated on the main Island (Streymoy Island) on the Eastern side of the peninsula, and is called Tórshavn. While it is known as a city, the population according to a 2015 United Nations statistic was less than 13,000 people. 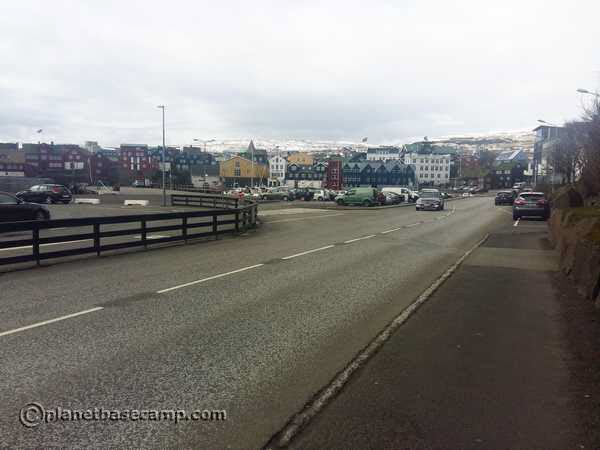 It is also in Tórshavn where the main harbor can be found with a ferry route all the way to Denmark.

However, just on the Western side of the peninsula is the Gamlarætt Ferry Port with routes to the smaller islands Hestur and Sandoy.

If you go for a stroll on the rocks you get a beautiful view of Velbastaður, situated just around the corner from the Ferry Port. It is tiny village and considered to be one of the oldest settlements in the Faroe Islands.

From Tórshavn we travelled all the way to the North-Western part of Streymoy to a tiny village called Saksun. Once a natural harbor, Saksun is now a lagoon which is only accessible by small boats during high tide. Apparently a storm brought in a lot of sand which blocked the harbor.

To get to the lagoon you have to drive to the end of the village to a place where you can only continue on foot. A narrow pathway then takes you right to the lagoon at the bottom of the cliffs. 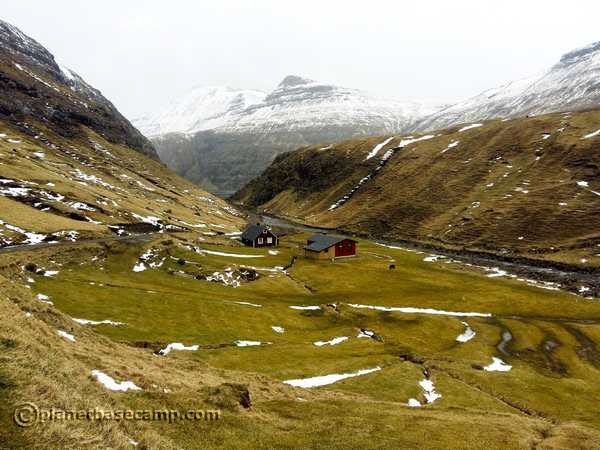 On the way down you pass this amazing settlement. We couldn’t believe that people actually live in such a serene place as this!

We were fortunate enough to have arrived during low tide and were able to walk all the way to the edge of the ‘beach’ which is entirely under water during high tide.

From Saksun we drove to Tjørnuvík, which is the northernmost village of the Streymoy Island. In 2002 the population was recorded as only 64.

What we love about Tjørnuvík is the view you have of the island called Eysturoy, as well as the local village called Eiði. Eiði has a lot of history associated with it, and was settled by Vikings in the 9th century AD.

Just off the cliff from Eiði is the famous sea stacks called Risin og Kellingin (Risin and Kellingin). The name Risin og Kellingin means The Giant and the Witch, and according to legend the sea stacks are giants from Iceland who wanted to steal the Faroe Islands and move them across the ocean to Iceland.

The legend goes on to say they didn’t notice the sun was coming up, due to the struggle they had to move the islands. Therefore they turned into stone on the spot as the sun beams touched them.

While it makes for an interesting story, the location provides an amazing view. 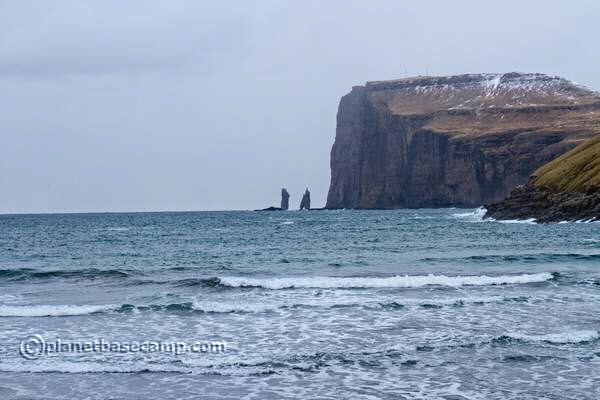 From Tjørnuvík we drove to the island called Eysturoy. Here we explored most of the island, from Eiði in the North all the way to Toftir in the South. As you go further South (beyond Toftir) you get to an amazing area where wind turbines generate a great deal of electricity used by the island (there is no shortage in the natural resource called wind!)

Again, just like everywhere else on the islands, the experience is surreal. 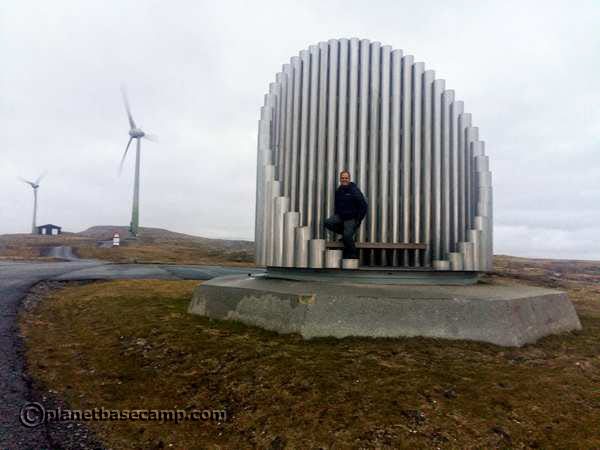 The biggest lake in the Faroe Islands is close to the airport. When flying in from Iceland, it is also the first lake you see when you come in to land. It was a picture of this lake that truly convinced us that we wanted to visit the Faroe Islands.

From the main road it is about a 1 hour walk to the end of the lake. Your reward is this incredible view of the lake’s waterfall that drops into the ocean.

The Faroe Islands is one of the most majestic places you could ever hope to visit. Whether you are looking for the perfect view of nature, waterfalls that run into the ocean, amazing rock formations and a black beach or two, world class engineering that produced amazing tunnels, good food or even just some peace and serenity, the Faroe Islands have all of this and more for you in store.