Scotland – Edinburgh In A Day

Scotland – Edinburgh In A Day

Edinburgh is a beautiful city in Scotland which boasts with more history than you can imagine. The city is a mixture of medieval marvel and modern day living, and no visit to Scotland is complete without spending at least a day or two here.

On this page we have put together an itinerary which stretches over 2 days, of which one full day will be used to explore the city.

Since Scotland is part of the United Kingdom, you have the options of travelling to her from England by car or by train. This is an excellent way if you want to enjoy the beautiful scenery that connects the two countries. Due to time constraints we flew in by plane and landed at Edinburgh Airport.

From the airport we took the Airlink Bus to Waverley station, which is only a 5 minute walk from where our hotel was located. The Airlink Bus has been one of the most pleasant bus experiences we have had to date, and we think this is the best way to travel from the airport to the center of the city.

It really helped to buy our tickets online before we went, and we didn’t have to wait in a queue at the kiosk outside the airport.

Hint: Sitting on the upper deck with a good view is a great way to begin your journey of Scotland. 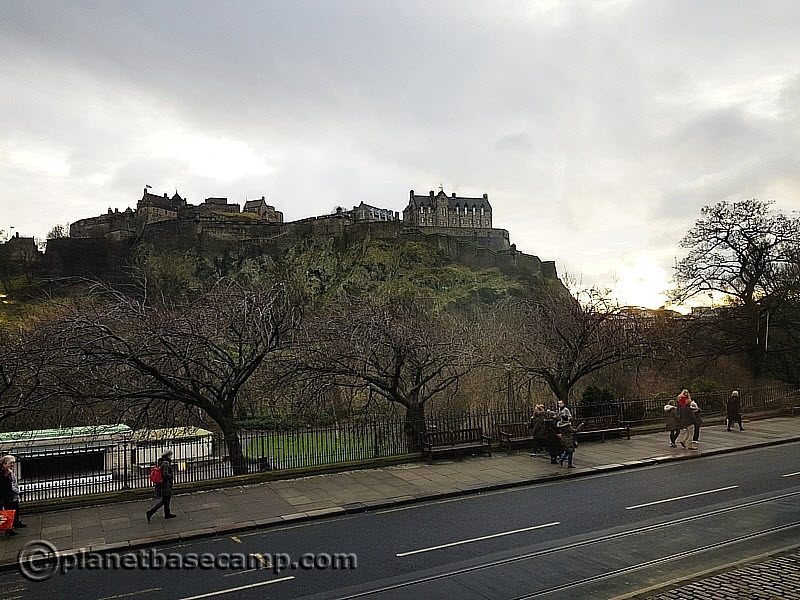 For our stay at Edinburgh we decided to stay for 2 nights at the hub by Premier Inn. We loved the hotel and thought it to be extremely good value for money. Although the rooms are tiny, it is amazing how well they utilize space. The hotel also got 5 stars from us for cleanliness. 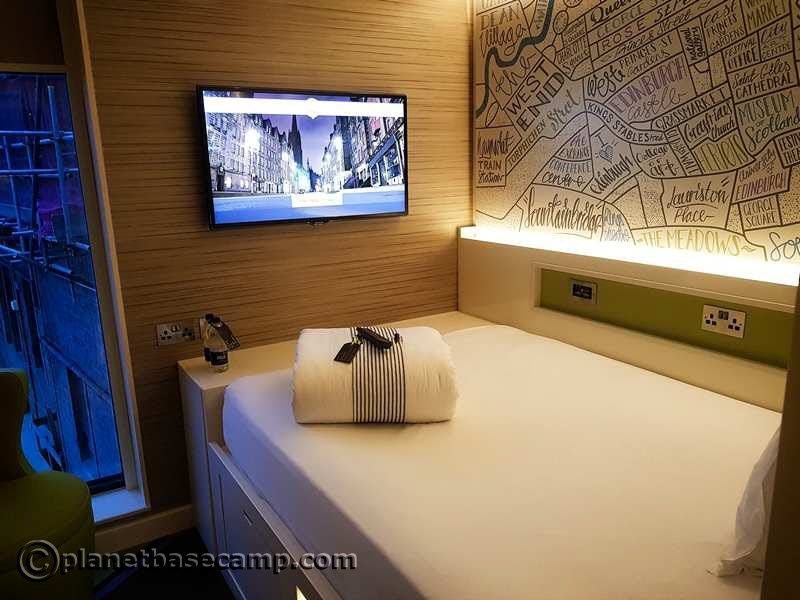 The hotel is conveniently located just below the Royal Mile, and you will be able to explore the major attractions from here on foot.

As already mentioned, the hotel is also within easy walking distance of the Waverley train station (5 minutes), making it easy enough to reach the hotel by train and bus, as the station is the last stop for the bus from the airport as well.

Click here for directions to the hotel from the station

After you have checked in to the hotel, you have the option of starting to explore a bit of the city already. It is entirely possible to tick off some of the items on the itinerary on day 1, but if you are tired you can rest and be ready for a fresh start in the morning. After all, they serve decent coffee and it is available any time during your stay. 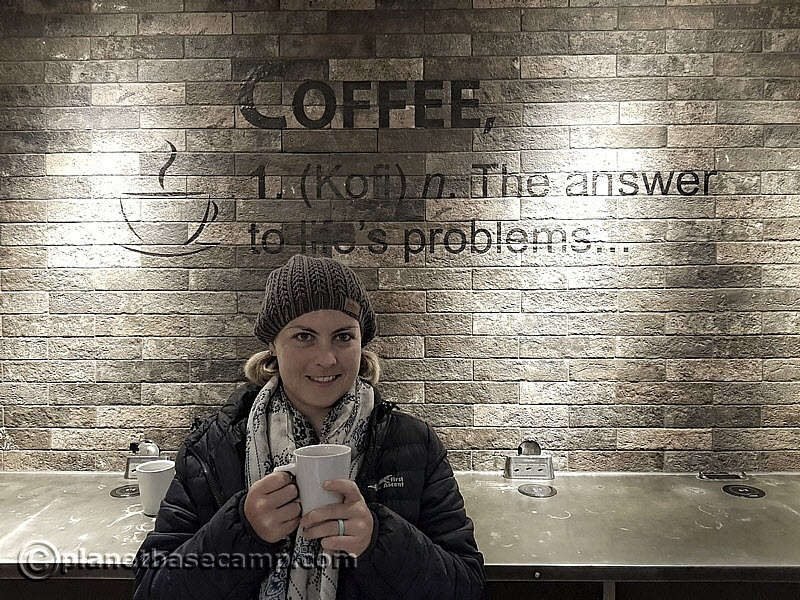 We love to explore cities on foot, and it was no different with Edinburgh. If you are visiting in winter, make sure you start the itinerary as early as possible, otherwise you won’t have enough daylight for everything on the list.

Our 1 Day Itinerary of Edinburgh included:

Total Distance That We Covered On Foot: About 8 km

Directions for the entire route can be found towards the end of the page.

Holyrood Park is a royal park in Edinburgh and a mere 10 minutes’ walk from hub by Premier Inn. Another 35 minutes will take you to Arthur’s Seat, the main hill in the middle of the park.

The walk is refreshing, and your reward is a beautiful view of the city. The wind at the top can get really cold, and the trail was a bit slippery for us at times. It would therefore be best to make sure you have warm clothes and proper hiking shoes with you. 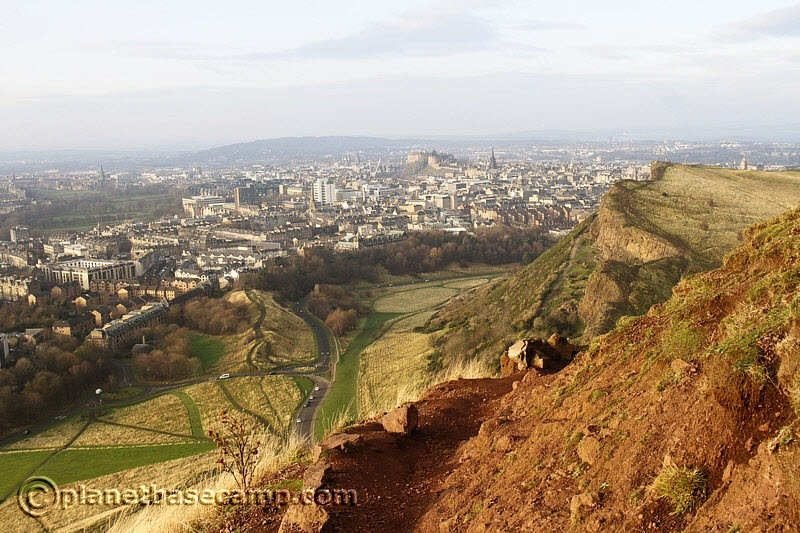 Depending on how quick you walk and how long you want to spend on the top of the hill, you should allow at least 2 hours for the hike.

There are two ways you can approach the start of the day. The first option is to have breakfast, and from there do the hike and go directly to the next item on the itinerary.

The second option is to take a few snacks with you and do the hike first. Enjoy the early sunrise and views of the city, then return to your hotel for breakfast and a shower. This would be the preferred method, as you can then move on to the next attractions refreshed.

As you return from Arthur’s seat, you can either go back on the road you came or continue on the trail to complete the circle which will also take you back to where you started. If you decide to do the circular route, the road will lead to the start of the Royal Mile where you can make an extra stop and visit Holyrood Palace.

Construction of the palace was completed in 1678, and it is now the official residence of the British monarch in Scotland.

A visit to the palace will allow you to see treasures from the Royal Collection, which includes paintings by Rembrandt and Canaletto.

You will need plan the start of your day according to the opening times of the palace, otherwise you might get there a bit early. Alternatively, continue with the rest of the itinerary and return later in the day.

You can view opening times and buy tickets here.

Of all the places we visited in Edinburgh, this was probably the most fascinating attraction.

A close is an old British term for a residential street with no through access, commonly referred to today as a cul-de-sac. Mary King’s Close is a historic close which is located under some of the buildings on the Royal Mile.

A tour of Mary King’s Close takes you underground and into the historic Old Town area of the 17th century. The Old Town was closed after an outbreak of the Black Plague, and the Royal Exchange of the 18th century was built on top of it. 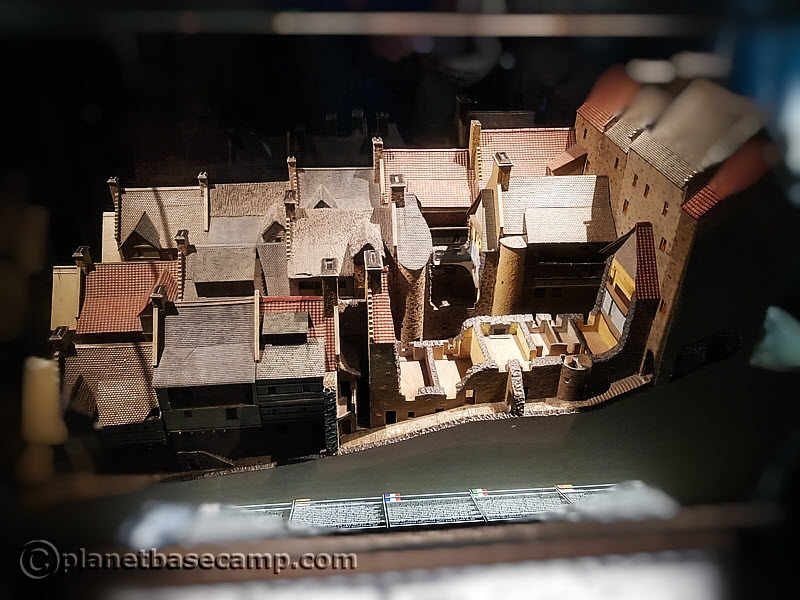 This is a guided tour and only a limited number of people can enter a time. This attraction is almost certain to be fully booked during the busy seasons, so we recommend to get your tickets online to avoid disappointment.

We spent about 90 minutes here.

St Giles’ Cathedral was originally founded in 1124, and had been the center point of contention for centuries. The building was destroyed in the 14th century but restored in 1390 with help from Edinburgh merchants.

In 1559 John Knox became the minister of St Giles’, and in 1560 Presbyterianism was established. The church is regarded as the Mother Church of World Presbyterianism and welcomes visitors from all over the world. 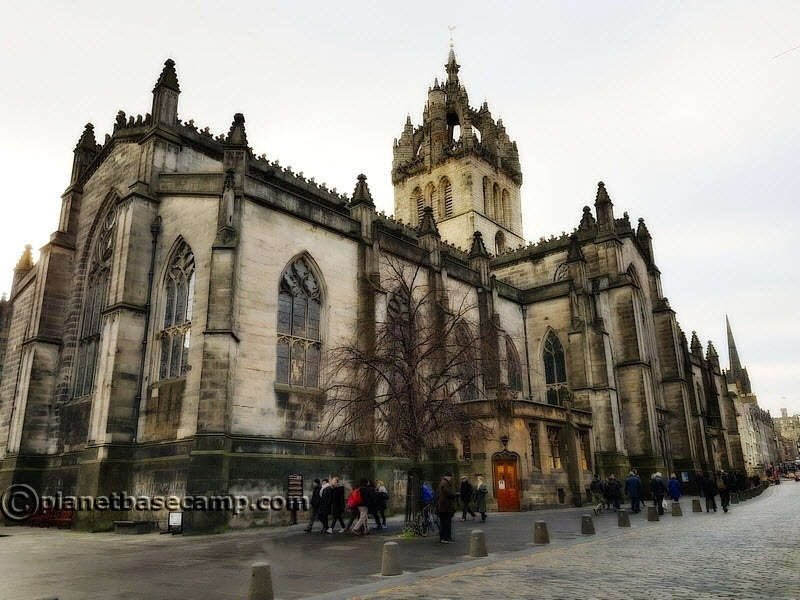 It is a truly beautiful building, and you can marvel at it from the inside as well. 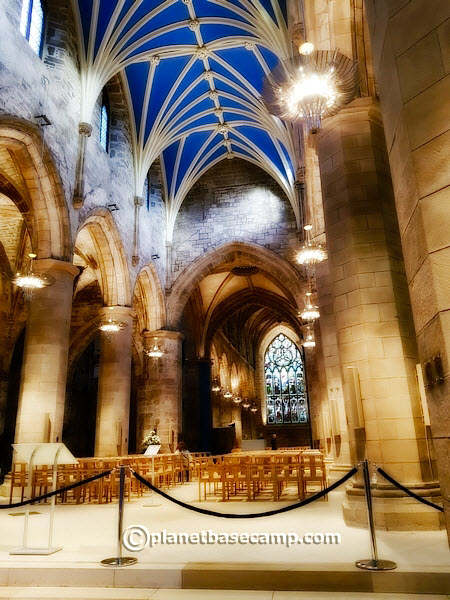 Check out their website for opening times and cost.

We spent about 15 minutes here.

Victoria Street in Edinburgh is a favourite spot for photographers, and you have to visit the street to see why. You can describe the street as being pretty, unique and colourful, combined with character and style. 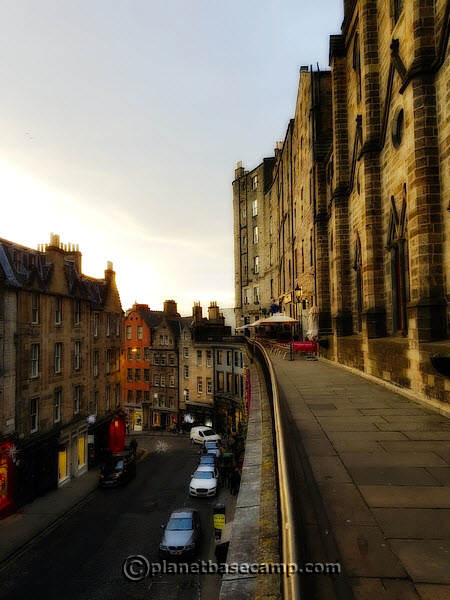 You can take a few photos and move on, or you can take your time and browse the shops and restaurants.

We spent about 15 minutes here.

People have been obsessed with optical illusions for centuries. Camera Obscura & World of Illusions takes the obsession to the next level, and presents you with all kinds of weird and wonderful tricks and illusions.

Camera Obscura was founded in 1835, and is one of the oldest attractions in Edinburgh. It is located just around the corner of Victoria Street. 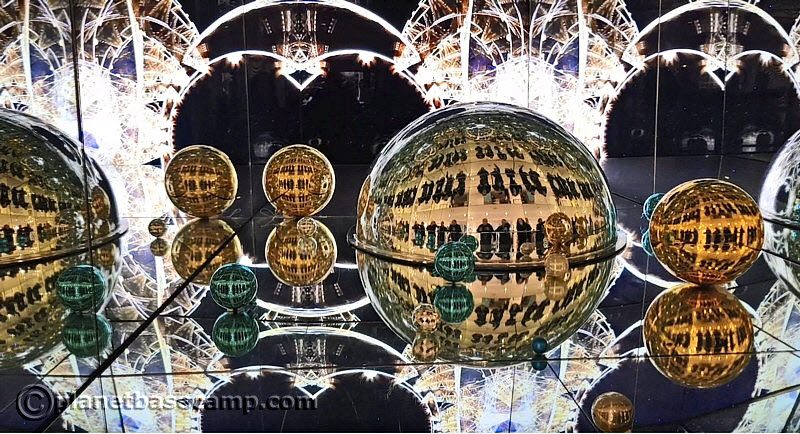 To manage expectations we do recommend that you decide beforehand if this is really something you want to do. There are some mixed reviews and this might not necessarily be your thing. Even so, the view of the city from the rooftop is amazing, and it might be worth visiting even if it’s just for that.

You can also visit the Camera Obscura website for more information.

As you drive in from the airport to Edinburgh, you can’t help but notice a historic fortress standing proud on a giant piece of rock. The rock you see is an extinct volcanic plug called Castle Rock, and the fortress you see is Edinburgh Castle.

It is believed that people have lived on Castle Rock from as early as 850BC. The Royal Castle was built during the 12th century by David the 1st, the son of Saint Margaret of Scotland. The castle was used as royal residence until 1633. 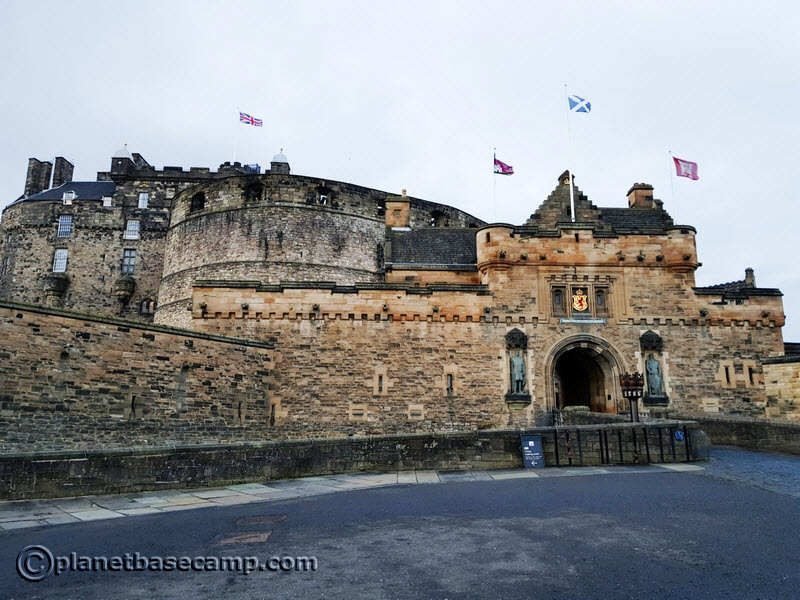 There is so much history that surrounds the castle, and a guided tour is your best option to get in on all the details and drama from the past. During peak season it’s best to get your tickets in advance, and we recommend one of the following tours:

Another unmissable structure which you will see when you drive into Edinburgh is The Scott Monument, dedicated to the Scottish author Sir Walter Scott. Sir Walter Scott died in 1832, and this Victorian Gothic styled monument was erected in honour of this outstanding literary figure. 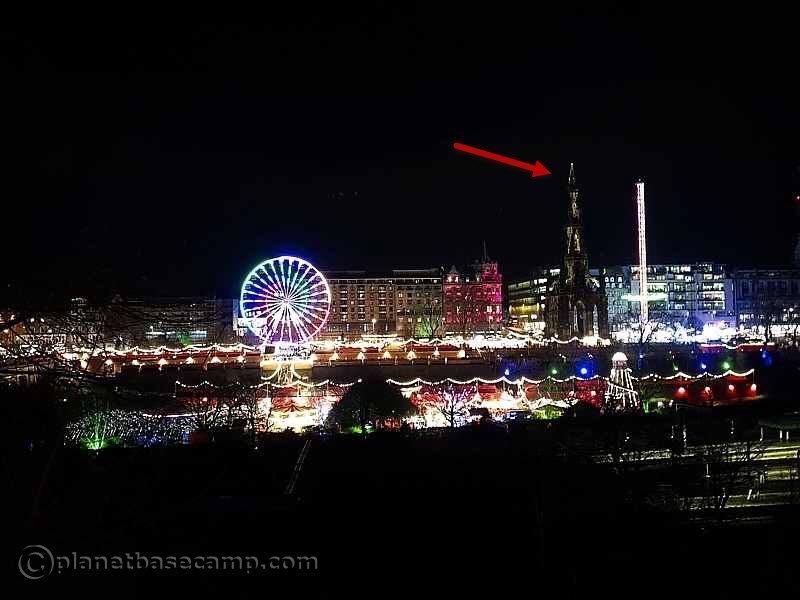 The largest monument to a writer in the world is the José Martí monument in Havana. The Scott Monument is the second largest, and can conveniently be reached from the Royal Mile on foot.

The shortest route to the monument is down Ramsay Ln and then towards Princes St via The Mound. However, if you go back to The Real Mary King’s Close, there is an amazing set of stairs which is not to be missed and will get you to Scott Monument via Waverley Bridge. 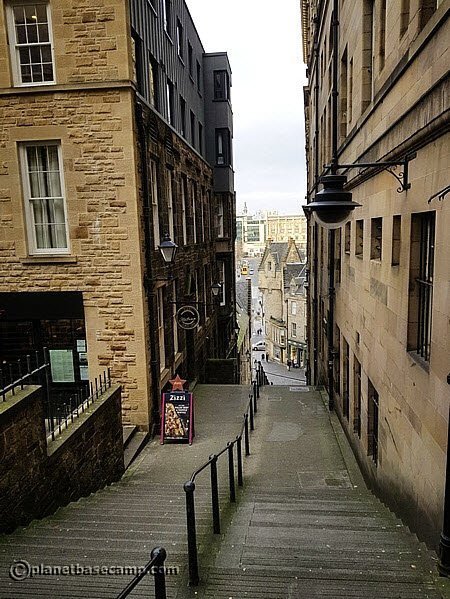 Head Back (hub by Premier Inn)

Walking time back to our hotel stay was about 10 minutes. You can visit one of the local pubs in the area for dinner, or grab a snack from one of the supermarkets along the way.

This is our itinerary based on the things that we wanted to see. You should do your own research and decide what you would like to see during your stay.

For example, you might be more interested in visiting one of the many Harry Potter sites. Edinburgh is, after all, the place that inspired J.K. Rowling to write her first Harry Potter book.

As promised, Click here for directions on the entire route on Google Maps

If you are a group of people, you may want to consider taking a complete 3 Hour Guided Tour of Edinburgh. Since we both like to do our own thing we didn’t consider taking this tour, but we saw many groups of people being guided by someone who told them more of the city than you would otherwise be able to discover by yourself. 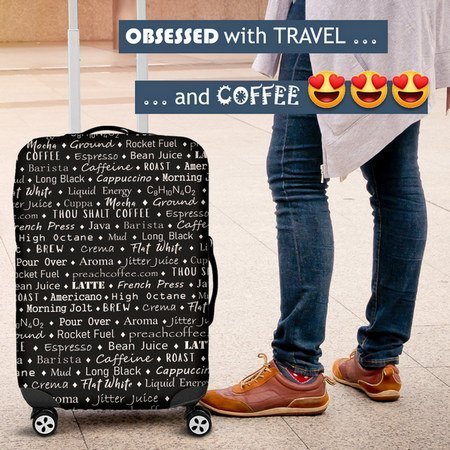